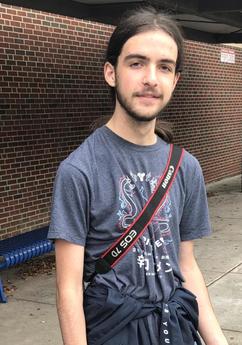 Why did you choose the game art & design concentration at DSA?
I am a really big fan of games and game design and DSA is the first high school that i've seen with a game design course so I had to try it out.

What has been your favorite part of being in GAD?
Definitely the environment of the class is very upbeat and fun to be in.

What do you consider to be the best thing about being a student at DSA?
After being at DSA for three and a half years I gotta say the best part of being a DSA student has to be the great artist, peers, and friends that I've made.

If you could interview anyone, dead or alive, who would it be and why?​
I'm not sure I think I'd like to interview a few of my favorite artists like Tyson Hesse or maybe Akira Toriyama. Instead of doing an Interview I'd like them to give me some art pointers.

Do you belong to any organizations, teams, or clubs in and out of school? Which ones?
Well in school groups that I go to are obviously table-top club and anime club. My friends and I have also formed a group centered around the tree that is out in front of the math and science building, this group has cleverly been named The Order of the Tree. You probably have seen me hang out there before already.

Describe yourself using three words.
Tell me about a favorite book, movie or game and why you liked it.
You know what game I've been playing a lot of recently and I highly suggest you check out Slay the Spire its a rouge like, RPG, collectable card game and I super love it which is weird because I don't usually enjoy card games as much as I used too. The mechanics alone are really fun to mess around with and honestly even if you don't buy it I'd suggest watching some streamers play it because getting a good run in that game is hella fun.
​​To more about this student, check out their portfolio at:
Miles Roman - Digital Artist